I just ran through the numbers for the economic outlook, and it’s not as bad as I had feared: 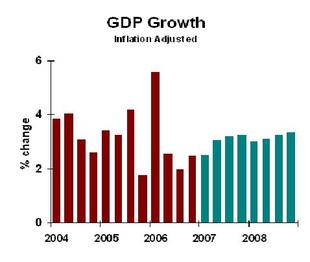 I pulled down business capital spending relative to what I had previously thought; pulled residential construction down in the first quarter, and also dropped consumer spending as a result of these changes.  I also tweaked inventories and all of the other major components.  The result is a decent forecast.  I had walked into the exercise thinking GDP would come down further than it does.  But the bottom-up approach gets the magnitudes right.  It’s easy to say, the economy will suck because housing construction is in the dumps.  But we don’t really know how badly the economy sucks until we put actual numbers into the calculation.  It turns out that the economy doesn’t suck too terribly badly, even though I have housing starts getting down to about 1.25 million units by the end of 2008.

Could we have a recession?  Obviously there’s nothing in the forecast about a recession, but I’ll stick with my odds of a recession as being somewhere between 10 and 20%.

Business Planning:  Outside of residential construction and its food chain, things look OK.

Investment Advice:  The underlying economy will be OK; it’s long-term interest rates that will limit stock market gains.  More on that in a later post.