The housing market is still lousy, despite the uptick in starts reported recently. 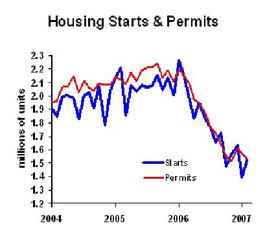 I just sketched out an look at 2007, and it’s not pretty.  Key facts:  last year, housing COMPLETIONS increased, even though housing starts declined.  That’s because of the lag between start and finish.  Housing completions plus new mobile homes jumped 20 percent in calendar 2006, to just over 2.0 million units.  (And I’ve netted out housing inventory converted to non-residential use.)

Demand?  Population growth justifies a little over 1.2 million units; vacation home demand added about a quarter million units, bringing the total demand for new units to about 1.5 million.  So we overbuilt by over 0.6 million units.  The vacancy rate for all housing has been rising for the last few years, and stands about three million units above long-run trend vacancy rates.  OK, that trend should be rising, but not enough to justify all the housing out there now.

Bottom line:  we are still over-housed.  Much more decline in housing starts needed to work off the excess.

Business Strategy Implications:  For those of you in the residential construction food chain, it’s not going to get better anytime in the next two years.