Gross Domestic Product smelled like a rose in the fourth quarter, contrary to our earlier expectations: 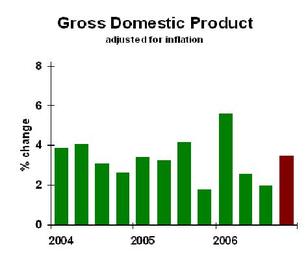 Why look at GDP?  Is it just another indicator?  Actually, it’s THE most comprehensive measure of the U.S. economy there is.  It’s the super-indicator, of which everything else (mostly) is just a subcomponent in some way.  So this is big news.

Lots of new in the details as well.  Consumers roared back in the fourth quarter:

Within the category, most of the discretionary components were strong.  Autos were the notable exception.  To get this much consumer spending strength without car sales growing is surprising. 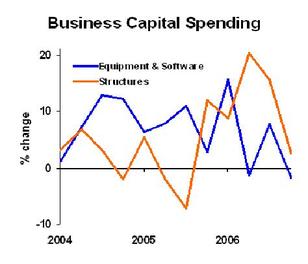 I was surprised because many industries had tight capacity, plus strong earnings, which usually is a formula for increased capital spending.  Not last quarter.

The numbers behind the charts are inflation-adjusted, which makes our expensive fuel imports look lower than nominal figures would.  Still, the strong export performance is good news.

In case you haven’t had enough good news this morning, inflation dropped by the broadest measure we have, the GDP deflator: 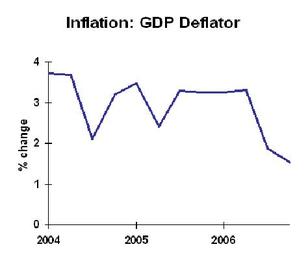 Business Strategy Implications: This economy is not sinking into recession.  OK, keep up the thinking about contingency plans, but give some thought to upside contingencies.