Today’s biggest surprise was low inflation, but the industrial production tells an interesting story about the manufacturing sector.

Inflation month-to-month was flat, both in total and in core (excluding food and energy): 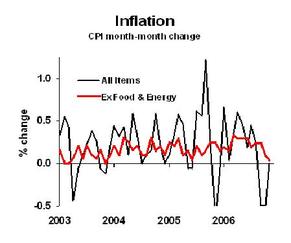 This suggests that the worst news on prices may be behind us.  Remember our comments on labor costs last week, arguing that we were over the hump.

What does this mean for Federal Reserve policy?  In their last statement, the Fed’s policymakers said that they expected inflation to decline, though they were still worried.  The 12-month percent change is 2.0% (all items) and 2.6% (core).  These are above the Fed’s comfort zone, but headed that way.  This past summer we were at 4.3% and 2.7% respectively.

Industrial production held up decently.  Unlike the headline reports, we focus on manufacturing production.  The broader "industrial production" measure includes utilities’ output, which is often distorted by weather different than seasonal averages. 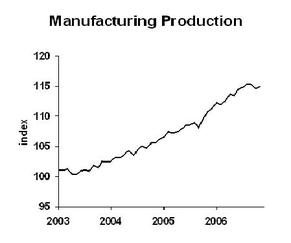 Notice the declines in September and October, and (take off your reading glasses now) the general slowing of growth in the last six months.  Most of the weakness is in manufacturing of construction supplies, such as lumber, plywood, wallboard, etc.  Also weak is furniture, because new home purchases often trigger the need for new sofas and chairs.  This report confirms that the primary area of weakness is related to housing, and that housing weakness has not spread to other sectors of the economy.  Consumer goods production was up last month, and is up 1.2% over the last 12 months, despite weak furniture and automobile activity.

Business Strategy Implications:  Don’t expect lots of pricing power in 2007.  Look for an OK year for activity outside the housing sector.

Other Blogs Posting on This Topic: Capital Spectator adds some perspective on Fed policy, The Big Picture thinks that the CPI figures don’t match reality (hey, they aren’t perfect but they beat collecting a few anecdotes).  As I skim a whole lot of blogs (via Google’s Blogsearch) looking for wisdom on today’s news, I see lots and lots of idiots out there.  No links posted to those people.  There are plenty of people I disagree with who have weighed the issues and formed a different conclusion; I’m not talking about them.  But I’m overwhelmed by the huge mass of bloggers who write short missives with absolutely no familiarity with the data or with economic theory.  Ugh.