The International Energy Agency has looked at investment in energy exploration and development and concludes:

There has been an apparent surge in oil and gas investment in recent years, but it is, to a large extent, illusory. Drilling, material and personnel costs in the industry have soared, so that in real terms investment in 2005 was barely higher than that in 2000.

They find that from 2000 through 2005, energy investment spending increased 70% in nominal terms.  It’s hard to believe the IEA’s conclusions.  The U.S. CPI over the same time period increased 13%, so if IEA is right, the real inflation problem was in energy-specific prices, such as the cost of renting a drilling rig, a seismic crew, pipe, etc.  But there would be no reason for these prices to rise if real demand were not increasing.  In fact, to get such a large price rise without an increase in real demand is absurd.

We know that drilling activity is way up: 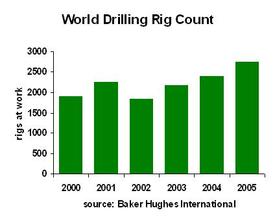 What do we learn delving into the study?  I don’t know.  IEA is selling it for 120 Euros, and I’m not convinced it’s worth the cost, based on the the summary information provided in new accounts.

Business Strategy Implications:  Oil exploration IS increasing rapidly.  It will eventually bring new oil supplies on line, and the price of energy will drop.  Go ahead and implement the cheap methods to reduce your fuel bill, but don’t make a major investment in fuel efficiency without giving the potential for price drops serious consideration.