Inflation Way Down, Manufacturing Down 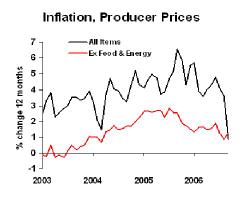 The drop was very sharp in the overall index, though the month-over-month change in core inflation (inflation excluding food and energy) was higher than expected.  Expect a lot of volatility in this measure right now, which accurately reflects volatility in the actual prices businesses are paying for materials.  The recent drop in oil prices shows the downward potential, which had been ignored for some time.  But even though I expect the trend to continue down, there’s the chance of a short, temporary spike in oil and other commodity prices.

Industrial production also declined last month.  The headline figure showed a 0.6% downturn, but that’s influenced by the weather-sensitive utility sector.  Gauging the underlying economy is best done with the manufacturing component, which was only down 0.3%.  Weakness showed up where we would expect–cars, housing construction materials, and related categories, such as home furnishings.  But there were also declines in clothing and textiles, industrial equipment, and chemicals.  In other words, the drop was fairly widespread. 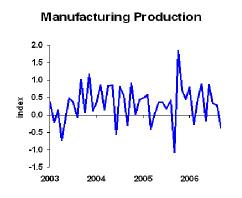 The decline in production runs counter to the most recent data, which has been more update.  If you’re not keeping score, we had lots of bad news in July and August, but the data have looked better the last month.

Business Strategy Implications:  This is a time for nimbleness.  Maintaining flexibility is critical.  I’d be skeptical of plans to reduce energy costs through large capital expenditures, and I’d be skeptical of plans to lock in current energy costs through long-term supply agreements.  If your company has yet to take my advice on contingency planning, get with it.