Cheap (or what passes for cheap) gasoline has given other retails sales a shot in the arm. 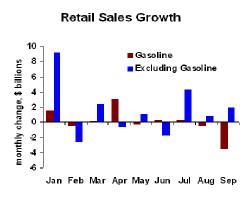 The January and July spikes in non-gas sales came from automobile industry special incentive programs.  Until September, it has been hard to see in the data that rising gas prices were displacing other sales.  That is crystal clear, however, in the September data, reflecting that consumers had some pent-up demand.

My view is that gas prices will drop some more (though perhaps with some backsliding, or upsliding, here and here).  That should help the rest of the economy somewhat.  However, it is too early to declare dead concerns about a slowing economy.