Home > Blog > Stagflation: What Is It? Is It Returning?

Stagflation: What Is It? Is It Returning?

A reader asks about stagflation:

"could you write about the causes of the ’70’s stagflation and what indicators could push the economy in that direction again?"

Sure.  Stagflation means stagnation (high and rising unemployment) and rising inflation.  Let’s look at some history: 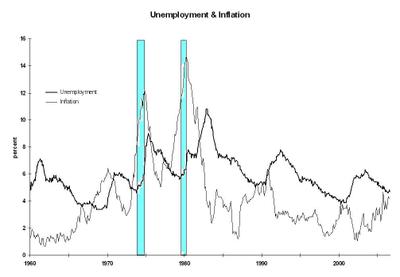 Notice first that there are two periods of rising unemployment and inflation both (aside from some isolated months here and there).  They are associated with the 1973-75 recession and the 1980 recession.  Periods of stagflation are brief.  They occur when monetary policy is being used to reduce inflation, but inflationary expectations are still high.  The inflationary expectations lead businesses and workers to continue demanding higher prices and wages.  One can think of inflation as having some momentum.  But demand is insufficient for consumers and business purchasers to buy all the goods and services being produced at the high prices.  That causes rising unemployment.  Eventually, people start cutting prices, inflation rates decline, wage inflation also slows down, and things get back to normal.

Oil price shocks aggravate the stagflation, because they tend to push inflation up and unemployment up at the same time.

The prospects for stagflation in the near future?  It’s quite possible that unemployment will begin to rise (though I don’t think that will happen).  We could have a period of time before inflation decelerates, so we could have six months of stagflation.  However, I think it’s highly unlikely that it will feel as bad as the stagflation periods of the 1970s.