Employment growth was weak again, and the unemployment rate ticked up.  I focus mostly on the growth of net new jobs, using a three-month average to balance out the ups and downs: 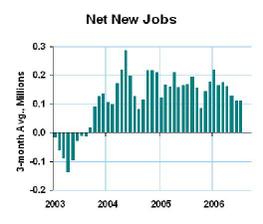 The rate at which we are creating new jobs is clearly lower now than at the first of the year, and lower than the average since early 2004.

The Fed can take a break for a while.  Their moves work with a lag, and I’m concerned that we have more lagged effects in the pipeline.  After the GDP report, I have scaled down my forecast for the coming year.  Still no recession, but slower growth than in previous forecasts, and a higher chance
that I’m wrong on the recession issue. 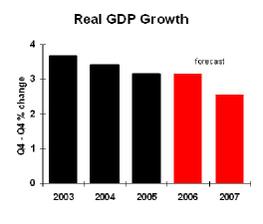 Business Strategy Implications: Begin contingency planning for an economic slowdown.  It’s too soon to really hunker down (unless you’re in residential development), but think through the steps you’ll take if things get worse.  My base case forecast does not require significant change in most business plans, but the higher risk of recession–even it it’s still only one chance in four–calls for contingency planning.