The overall economy is expanding at a much slower pace. 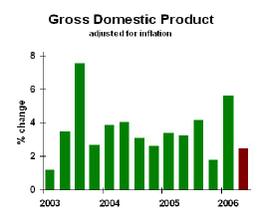 Growth rates of consumer spending and business equipment spending were both down.  Housing construction was also down, as was government.  The business equipment drop surprised me, but the slowdown in consumer spending and housing was expected (at least by me).  I was one of the few economists whose forecast was below the actual; most of my fellow forecasters had been expecting GDP growth higher than what materialized.

The lagged effects of the Federal Reserve tightening are now being felt, along with the impact of higher oil prices.  This report marks the transition to a slower growth economy.  I still see no signs of inflation, but I won’t argue with those who say that the risk of a recession has increased.  One gauge now pegs that risk at over 20% (over the next 12 months).  That sounds a tad high to me, but only a tad.

Business Strategy Implications:  Contingency planning first.  Sketch out what you’ll do if business sours more.  Even though it’s too early for most companies to execute the recession plans, it really helps to think through ahead of time what the action steps will be if sales growth slows.  I’d be happy to help; give me a call.