The recent economic news suggests a slowing of the rate of economic growth.  Economic growth is not changing dramatically, but the news displays a minor change of pace.  Most obvious is employment growth, which has been disappointing in the last few months: 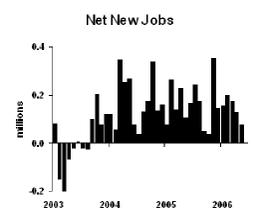 The unemployment rate dipped down to 4.6%, which is fairly low.  Business leaders tell me that they have trouble finding people with the right skills and good work habits.  The tightness of the labor markets is probably limiting growth potential right now.  I expect wage rates to show an acceleration in the rest of the year.

The ISM index (formerly the Purchasing Managers Index) shows the manufacturing sector expanding, but by a small amount.  Note that in the ISM index, any value above 50 shows expansion: 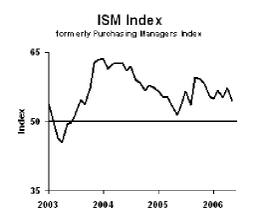 Home prices also show a slowing.  In the following chart, we show the national repeat purchase index (which is an apples-to-apples comparison of home price changes).  We show quarter-over-quarter changes, at an annualized rate, to indicate what’s been happening most recently.  We also show four-quarter percent change, which gives a smoother perspective covering a full year.

The one bright note in recent data was the gain in non-residential construction.  Keep in mind, though, that this is a lagging indicator.  That means that non-res construction turns up after the overall economy has turned up; it tells us very little about where the economy is headed. 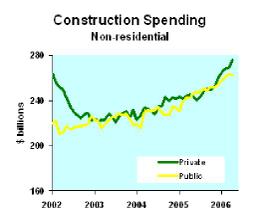 As a result of recent news, I do not expect the Fed to raise interest rates at their next meeting.  I still think they are likely to move rates up a quarter point in each of two moves later this year.  Long-term rates likely to move up about a percentage point over the next year.

Business Strategy Implications:  The growth slowdown will be very mild; it’s pretty safe to bet on the rest of 2006 and 2007 feeling about like the past year has felt, aside from the housing industry.