March was a good month for retail sales.  Although car sales helped a lot, most other retail sectors moved forward as well. 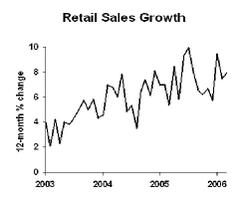 The weak sectors were electronics retailers and gas stations, the latter because prices dropped a touch in March (but have come back so far in April).

Over the last 12 months retail sales have climbed 8 percent, while inflation is running about 3 percent, so real sales increases are 5 percent.  That’s pretty high.  The most recent monthly numbers are comparable.  Real retail spending growth normally averages around 3 percent, so look for this figure to decline.  If not, the Fed will raise interest rates steadily.

Business strategy implication:  Retailers should expect less growth in the upcoming 12 months than they’ve had in the past 12 months.  Some of you are brilliant, but most of you are floating up on a rising tide.  That tide will ebb (in terms of growth rates, not total dollars) over the course of 2006.