Oil production will peak some day?  Probably.  But a peak that’s 100 years out is not too relevant to today’s decisions.  If oil production peaks due to falling demand, as would happen with development of alternative energy sources, that’s not a problem.

Oil is not just found randomly.  Oil is found when it is explored for.  (There were some natural oil seeps observed, but commercial oil production dates back to 1859 when the first oil well was drilled in Titusville, Pennsylvania.)

Production occurs with a long lead time.  It takes years of expenditures for exploration, development, building pipelines and terminals, before oil is delivered to market.  Thus, it may seem that production is not responsive to price, when in reality long time lags are involved.

Oil exploration fell sharply in the wake of the low oil prices of the mid 1980s.  In July 1986, oil dropped to $11.58.  Exploration and development shriveled.  As recently as 1998 oil was below $12 a barrel.  Investors don’t get excited about funding exploration at such low prices.  When oil prices recovered to $30 in 2000, exploration looked more promising—but by the end of 2001, prices had retreated below $20.  In short, this has been a lousy environment for oil exploration simply due to low oil prices. 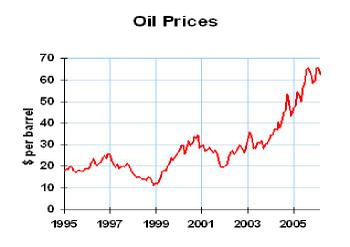 Now that prices are high, and have been above $30 nearly three years, exploration is in high gear.  Every drilling rig in the world is busy.  Give them time and they’ll find oil.

United States oil production has certainly been in decline since the bottom fell out of the market in 1986.  It’s quite possible that we’ll never regain our peak output.  But we live on a big planet.  The United States is the most heavily explored oil producing region in the world.  A study published in 1994 found that 74 percent of all the oil wells ever drilled were in the U.S.  As other countries develop, they will be explored more heavily.  Helping world production will be the global trend toward free markets.  Also helping will be economic development, which brings infrastructure (roads, ports, etc.) which aid in oil exploration.  Finally, the high prices will give political leaders a larger incentive to open up their countries to more extensive exploration.

Business implication:  watching energy costs makes sense, but don’t bet the company on investments that only pan out with high energy prices.  Look for a robust strategy, one that allows for profitability at a wide range of energy prices.