In its first meeting with Ben Bernanke as chair, the Fed raised short-term interest rates a quarter point. 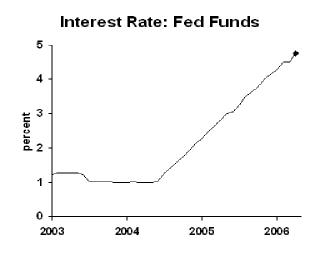 So Ben is willing to raise rates.  No surprise there.  And the Fed sees strength in current statistics, which I do too.  However, there isn’t room for more than another move (or two) before the economy will begin to slow down.  I think we’re heading to the soft landing, but no one is ever sure until after the fact.

Business Implication:  Look for rates to settle down after one more hike.  Economic growth should be steady at about recent pace in 2006.